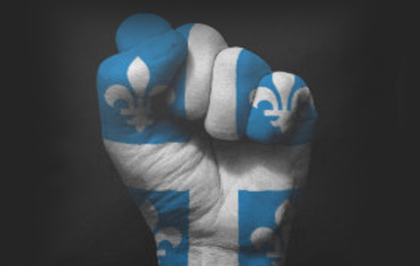 Update February 26, 2017 – Today,  in response to the Province’s position, the Canadian Jiu Jitsu Championships have been cancelled.  Canada National Pro Jiu Jitsu reported as follows on their Facebook page –

This Friday at 6:00 PM, an official complaint was launched to the SPVM. The SPVM, acting on an internal legal memo that included Jiu-Jitsu as a combat sport, i.e. having strikes (“an encounter or fight with fists, hands or feet”), according to section 83 of the Canadian Criminal Code, informed the Abu Dhabi Pro Jiu-Jitsu committee that they would proceed to enforce the section to arrest any participant in the tournament. Furthermore, they informed the committee that the Municipal Prosecutor of Montreal intended to prosecute every such case to court. It should be noted that the commander of the SPVM in charge of the complaint did not know that Brazilian Jiu-Jitsu (BJJ) was different from “Jiu-Jitsu” and did not have any strikes in its matches.

The Abu Dhabi Pro Jiu-Jitsu committee, the UAE Jiu-Jitsu Federation and numerous members of the Brazilian Jiu-Jitsu community attempted to convince the SPVM of the difference between BJJ and Jiu-Jitsu from the time of the complaint. There were vigorous efforts and resources deployed to explain that section 83 of the Canadian Criminal Code did not apply to BJJ, however, due to the tight time frame between the time of the complaint and the event, there was no time to engage with the SPVM’s legal department or to proceed with other alternatives solutions. We tried every avenue possible until there was no other alternative.

On behalf of the Canada Pro Jiu-Jitsu committee and the UAE Jiu-Jitsu Federation, we would like to apologize to all the athletes, coaches, teammates, and families affected by this decision. It was not a decision that was taken lightly. However, considering that our first priority is the security of our competitors and secondly the reputation of our great sport, we believed that there no other alternative to the postponement of the tournament.

Please contact Registrations@uaejjf.org for reimbursement inquiries. We will also reopen the registration process to allow other competitors to come and support the event and BJJ.

Earlier this month Quebec confirmed that amateur combative sports not on the Programme of the International Olympic Committee (such as MMA, Muay Thai and Kickboxing) are illegal under the Criminal Code and that contests of these sports cannot presently be legally held in the Province.

While this is an accurate position to take the Province turned a blind eye to this legal landscape for years allowing these sports to thrive.  The reason for their sudden turn of position is unclear given that the current legal landscape has been in place since 2013 when the Criminal Code was overhauled.

Whatever the reason, it appears that Quebec is now taking an even broader position of the Criminal Code prohibition applying it to grappling events.

Today, Quebec based MMA referee Yves Lavigne posted the below letter from a local promoter informing the public that as of 5 pm Friday his planned Brazilian Jiu Jitsu tournament would be in violation of s. 83 of Canada’s Criminal Code. 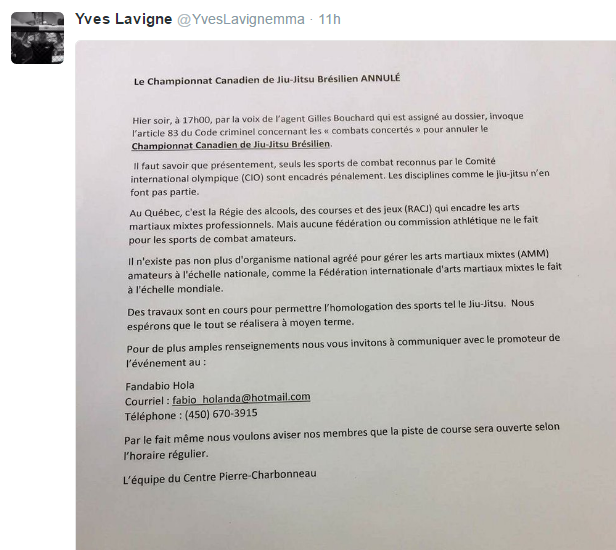 This position would not only effect Brazilian Jiu Jitsu but all forms of non-Olympic grappling tournaments such as Sambo.

It is unclear if the Province’s legal interpretation of s. 83 of the Criminal Code is accurate as Senator Runciman himself, the man who drafted the law, claimed that grappling promoters “will be safe” under the law and that it was not meant to extend to grappling contests.

Given the position of the Province, however, it may take judicial interpretation to determine if indeed the Criminal Code outlaws grappling based non Olympic combative sports or only those involving striking.  I have previously canvassed both sides of this debate here.