Last week NextGen Brazillian Jiu Jitsu hosted an amateur BJJ contest despite the Province saying such events are illegal.  In an interesting twist Toronto police officers were present but not to arrest anyone, rather they posed for photos with participants thumbing their nose at the Province’s position.

The Province, apparently not too pleased with this show of defiance, has now doubled down sending a letter to all “Professional Combative Sports Stakeholders” threatening those that participate in “illegal” events.

The full letter is set out below: 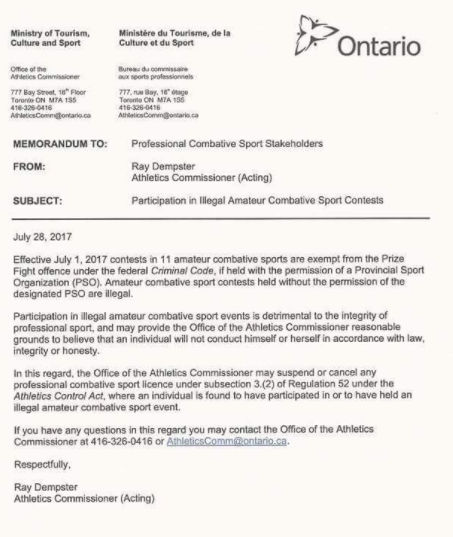 While there is no doubt the government can use section 83 of the Criminal Code to keep various ‘prize fights’ illegal there is a live debate about whether the vaguely drafted section gives the Province the power to deem amateur grappling contests illegal.  As previously discussed the Senator that wrote the law has gone on record saying this was never the law’s intent.

I repeat my offer that while I can’t encourage anyone to break the law, my offer remains open that should anyone in Ontario (or Quebec, another jurisdiction that is seeking to expand s. 83 to grappling events) be criminally charged I will, if asked, work with your local lawyer free of charge to help navigate this legal landscape.