Common sense tells us taking hits to the head it bad but for those who choose a career in combative or contact sports (and also for those that regulate these sports) the elusive question is how much ‘mileage’ is too much?

A recent study, published in the Journal of Radiology, shows some promise in getting closer to answer this question by identifying seven biomarkers evident on MRI which were predictive of cognitive decline in professional fighters.

In the study, titled Multimodal MR Imaging Signatures of Cognitive Impairment in Active Professional Fighters, the authors studied 297 active professional fighters, 62 of whom attended follow up examination.  The fighters underwent neuropsychological testing and had their brains examined via MRI.  The authors were able to identify 7 biomarkers which predicted which fighters would have cognitive impairment as measured by the neuropsychological testing.

The authors note that “structural and diffusion-weighted MR imaging in conjunction with multivariate analysis may yield imaging biomarkers of early brain damage related to cognitivedecline in subjects with repeated head trauma.”  In other words, the brain damage caused by fighting or contact sports may be tracked through objective data.  This may make it easier for fighters and regulators to decide when to pull the plug on their careers.

The abstract reads as follows:

Active professional fighters (n = 297; 24 women and 273 men) were recruited at one center. Sixty-two fighters (six women and 56 men) returned for a follow-up examination. Only men were included in the main analysis of the study. On the basis of computerized testing, fighters were separated into the cognitively impaired and nonimpaired groups on the basis of computerized testing. T1-weighted and diffusion-weighted imaging were performed, and volume and cortical thickness, along with diffusion-derived metrics of 20 major white matter tracts were extracted for every subject. A classifier was designed to identify imaging biomarkers related to cognitive impairment and was tested in the follow-up dataset.

The classifier allowed identification of seven imaging biomarkers related to cognitive impairment in the cohort of active professional fighters. Areas under the curve of 0.76 and 0.69 were obtained at baseline and at follow-up, respectively, with the optimized classifier. The number of years of fighting had a significant (P = 8.8 × 10−7) negative association with fractional anisotropy of the forceps major (effect size [d] = 0.34) and the inferior longitudinal fasciculus (P = .03; d = 0.17). A significant difference was observed between the impaired and nonimpaired groups in the association of fractional anisotropy in the forceps major with number of fights (P = .03, d = 0.38) and years of fighting (P = 6 × 10−8, d = 0.63). Fractional anisotropy of the inferior longitudinal fasciculus was positively associated with psychomotor speed (P = .04, d = 0.16) in nonimpaired fighters but no association was observed in impaired fighters.

Without enforcement of any a priori assumptions on the MR imaging–derived measurements and with a multivariate approach, the study revealed a set of seven imaging biomarkers that were associated with cognition in active male professional fighters. 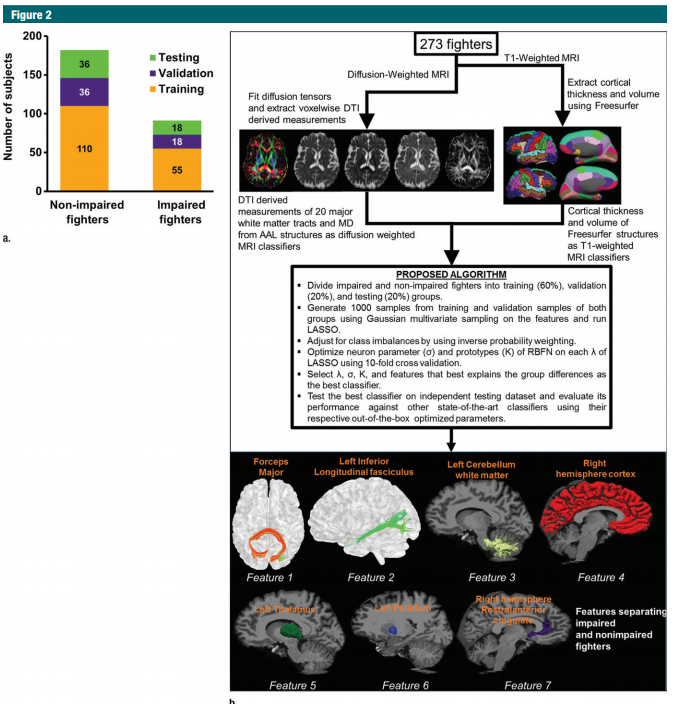 The full study can be accessed here.