Update August 16, 2017 – …The NAC, today, approved 8 oz gloves.  They relied on no scientific evidence speaking to the safety of this decision contrary to advice from the ARP.

…Unless the Nevada Athletic Commission choose to ignore their own rules and the Association of Boxing Commissions and Combative Sport’s Regulatory Guidelines.

Earlier this week Floyd Mayweather made headlines stating he will wear 8 oz gloves in the bout against Conor McGregor.

McGregor and Mayweather are fighting at 154 pounds.  They must use 10 oz gloves.  The commission only enjoys the power to deviate from this for “a championship contest“.  There is no title belt on the line for this bout.

The current regulation reads as follows: 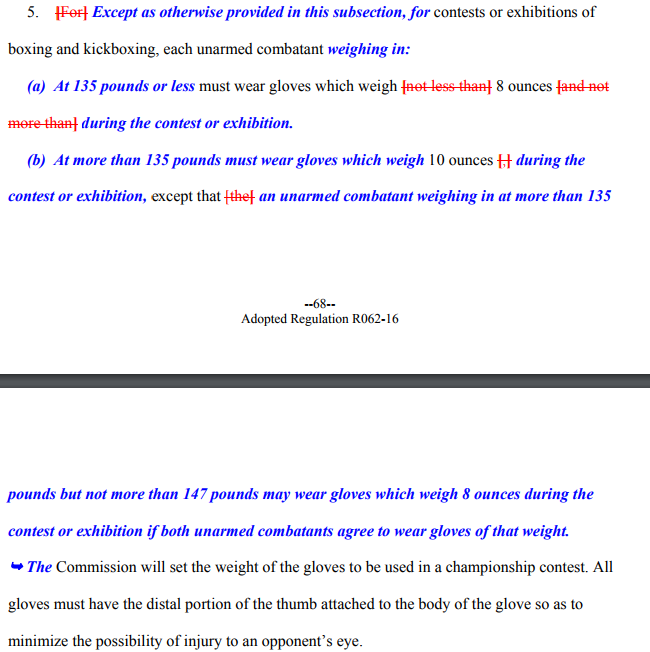 The only chance of having the NAC approve 8 oz gloves is if the NAC is prepared to ignore the above section and rely on their general powers contained in NAC 467.008 to deviate from their rules.

“The Commission may, at its sole discretion, waive a requirement set forth in this chapter for any cause deemed sufficient by the Commission.“.

It is hard to imagine that the NAC would be prepared to waive a mandatory safety rule allowing lighter, smaller gloves to be used by a competitor making his professional boxing debut against a seasoned veteran of the sport.

2 thoughts on “No, McGregor and Mayweather Cannot Wear 8 oz Gloves…”