Update November 29, 2017 – The Government has now recognized a PSO for Grappling and Pankration.

Update June 29, 2017 – the Ministry of Sport has responded to my request confirming that there is not PSO for BJJ at this time but indicate this may change shortly advising as follows:

“the Ontario Jiu Jitsu Association was close to being recognized however they have not submitted all components of their Sport Recognition Application and therefore are NOT recognized at this time.  They are close so they may be added in the near future”

If and when OJA receives PSO status they will have a government granted monopoly to run BJJ contests in Ontario. As explained at the bottom of this article it is unclear if a tournament outside of OJA oversight could be successfully prosecuted as a criminal ‘prizefight’ but arguably Ontario is overstepping their bounds by taking such a position.

Earlier this month Ontario passed Order in Council 1087-2017 designating exactly which amateur sports are legal and how they are to be governed in the Province.

In short, Ontario designated that the following amateur combative sports are legal (notably Mixed Martial Arts is not on the list):

There is a catch, however.  To legally hold a competition involving these sports in Ontario the OIC requires that permission be obtained “from the Provincial Sport Organization recognized by the Ministry of Tourism, Culture and Sport pursuant to its Sport Recognition Policy for the amateur sport“.

The only exception to this is a wrestling contest to be held by a school or a university where “ permission is required from the applicable school or university athletic association or its affiliate“.

So why are amateur BJJ and Grappling set to be illegal even though they are on the list?  Because the government has not named any Provincial Sport Organization to govern these sports.

The Ministry of Tourism, Culture and Sport has recently named all PSO’s pursuant to this OIC.  They are as follows: 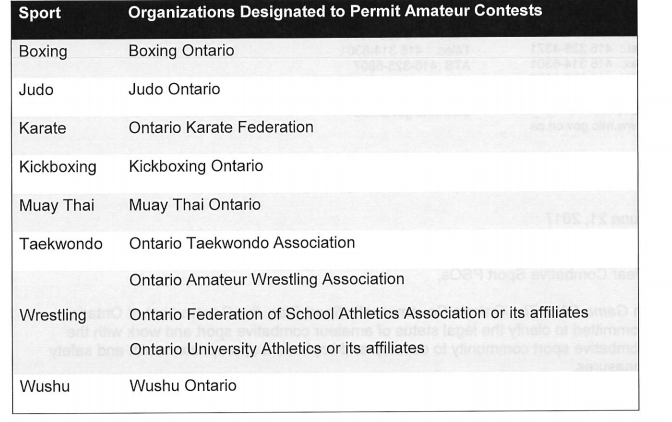 The absence of a BJJ And Grappling PSO is noticeable and the Government, in a letter dated June 21, 2017 warned as follows:

Section 83 of the Criminal Code defines as prizefight as “an encounter or fight with fists, hands or feet ” but the Government of Ontario seem to have unilaterally expanded this definition in their exercise of their prizefight regulatory powers to define combative sports with the following broader scope

“A sport that features a contest where participants use striking with fists, hands, feet or any other part of the body, throwing, grappling, wrestling, immobilization or submission techniques, or any combination of these techniques”

Ontario takes the position that the following means a “contest”

Contest: A contest means a competitive event or exhibition where:

It is worth noting that it is legally questionable if Ontario has the power to make these grappling sports illegal.  They certainly are within their rights to criminalize amateur striking combat sports of their choosing as they are expressly given this power under s. 83 of the Criminal Code.  Grappling contests are legally murkier with the Senator that wrote the law noting it is ‘inconceivable’ that authorities seek to extend s. 83 to amateur grappling sports.

In any event, with the Government’s line in the sand as of July 1 BJJ competitors and ‘grappling’ competitors in Ontario will be left with a difficult choice.  Do not compete in your chosen sports or risk criminal prosecution if you do.

6 thoughts on “Ontario Set to Criminalize Amateur BJJ and Grappling as of July 1, 2017”