Update June 18, 2017 – It is reported that Tim Hague has, unfortunately, succumbed to his injuries.

Tragedy has struck the world of combat sports with UFC vet and former King of the Cage Canada heavyweight MMA champion Tim Hague fighting for his life following a boxing bout.

Hague was knocked out by Adam Braidwood in the second round.  The bout was a one sided affair with Hague being knocked down 3 times in the first round with an arguable 4th knockdown that the ref deemed a slip.

In the second round Hague was dropped for a fourth time and allowed to continue.  Shortly thereafter the final knockout blow landed.

Footage of the bout has been broadcast on YouTube.  Viewer discretion is advised.

The bout was regulated by the Edmonton Combative Sports Commission.  Criticism has been leveled by some in the combat sports community calling this a mismatch and questioning whether Hague should have been licenced at all given his recent string of head injuries sustained in both boxing and MMA bouts.

When tragedy occurs the legal microscope is almost always quick to follow.  Should litigation arise here are some key points that likely will be considered.

First, the legality of professional boxing in Alberta is a Canadian oddity.  Throughout the Country pro boxing is regulated by Provincial commissions. Alberta is an outlier, however, having municipal commissions with the rules and requirements for the sport changing from City to City.

Pro boxing in any Alberta City is also legally dubious.  As a starting point professional boxing is illegal in Canada.  Section 83(2)(d) of the Criminal Code allows Provinces to override this default position stating as follows:

Alberta’s legislature has never expressly established an “athletic board, commission or similar body“.  Instead they have simply implied that cities may do so under section 535 of the Municipal Government Act.  This legislation does not say that cities can legally regulate combat sports under the Criminal Code, it simply says that if they do they will enjoy a certain level of immunity from lawsuits with section 535.1(2) reading as follows:

A commission and its members, officers, employees and any
volunteers and officials performing duties under the direction of
any of them are not liable for anything said or done or omitted to
be done in good faith in the performance or intended performance
of their functions, duties or powers under this Act or any other
enactment.

So, assuming a Court is willing to say the power of Edmonton to regulate pro boxing is properly legally derived the first issue will be how broadly this statutory immunity is applied.  If a Court finds the commission and its members acted “in good faith” then they enjoy immunity from litigation.

Next, the ECSC expressly requires fighters to sign a waiver.  A court will need to grapple with whether a forced waiver in a monopoly regulated sport is enforceable and further the extent of its protection.  The ESCS uses the following language in their waiver 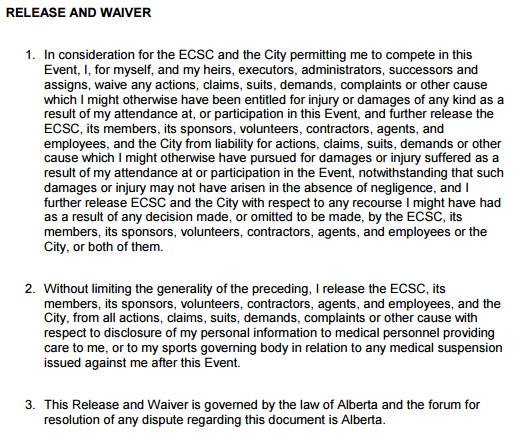 Assuming litigation can get around the statutory immunity and the above waiver, a Court would likely be asked to determine if the various stakeholders involved met a reasonable standard of care in allowing this bout to take place and allowing it to continue to its ultimate conclusion.

Expert evidence would be called addressing whether it is reasonable to allow a fighter who is dropped 3-4 times in the first round and again in the opening of the second round to continue.  The ringside physician will face similar scrutiny as is occurring in the Dennis Munson Jr litigation.

Expert evidence would also be called to address whether a fighter coming off of 7 knockouts in the last 24 months was fit to continue as a professional fighter.  Lastly a Court would need to grapple with whether a fighter who is 1-2 in boxing is objectively fit to be matched up against an opponent with a 7-1 record on 2 weeks notice. 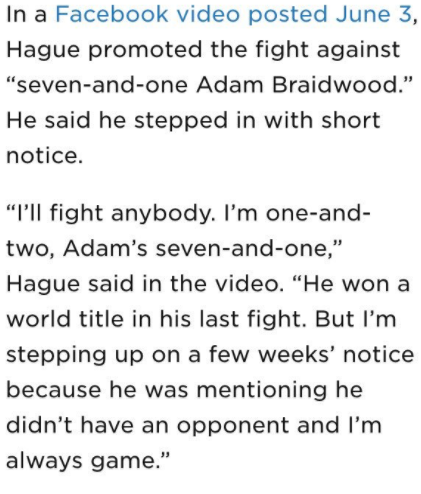 Athletic Commissions exist first and foremost for fighter safety.  Sometimes their job is to protect fighters from themselves.

One of ECSC’s policy’ that will come under scrutiny is the fact that their requirement for brain imaging has no timeline to it.  A fighter can submit imaging from years ago and that’s good enough.

Unless the “primary care physician” that signed off on such a physical is a member of  or affiliated with the commission no immunity will be enjoyed and such a physician’s judgement may well be targeted in litigation.

Using this protocol, applied to Hague’s three most recent KO/TKO losses, he was not fit to be licenced until at least April, 2018.

According to the ECSC’s own words this policy exists “To determine the amount of time to medically suspend a contestant after a particular match to ensure the contestant has time to heal before participating in training and before competing in subsequent match”.

If a licensed fighter is to be suspended for at least a year after having 3 KO losses in the previous year, what diligence went into licencing a fighter that apparently had 7 KO/TKO losses in the 2 years prior?  A key issue is whether this crucial safety standard was violated and if so, was there any “good faith” justification for this.

The ECSC expressly adopts the ABC’s rules when it comes to the regulation of boxing events.  These will likely also be examined to see which, if any, of the rules were not followed.

It is unfortunate that this tragedy occurred.  The above questions, among many others, will need to be answered to seek out room for improvement in regulation of combative sports.