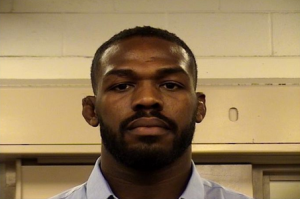 Update April 28, 2015 – the UFC has now acted and they have stripped Jon Jones of his title and suspended him indefinitely.

With Jon Jones facing felony hit and run charges after he allegedly fled the scene of a motor vehicle collision in Albuquerque this weekend (Jon Jones Arrest Warrant Affidavit), the pressing question is whether he will still be allowed to participate in his scheduled UFC light heavyweight championship defense against Anthony Johnson at UFC 187 in Las Vegas.

Not only can the NSAC suspend Jones’ licence if they conclude he misled them in the wake of the Daniel Cormier press conference fight, but they can also seek to rely on the above legislation (although it can be argued that felony hit and run does not meet the definition of a crime of moral turpitude) if they want to draw a line in the sand.

Both the NSAC and the UFC have options to explore if they want there to be consequences for Jon Jones’ actions.  The question is do these organizations want to pull the trigger or would they rather leave UFC 187 undisturbed?