In today’s study (Repeated head trauma is associated with smaller thalamic volumes and slower processing speed) published at the British Journal of Sports Medicine, 224 fighters (131 mixed martial arts fighters and 93 boxers) were recruited along with 22 controls.  Each participant underwent computerised cognitive testing and volumetric brain MRI.  The results were that “Increasing exposure to repetitive head trauma measured by number of professional fights, years of fighting, or a Fight Exposure Score (FES) was associated with lower brain volumes, particularly the thalamus and caudate. In addition, speed of processing decreased with decreased thalamic volumes and with increasing fight exposure”

Perhaps not surprisingly, boxers were found to have endured more damage as illustrated by the following graphic: 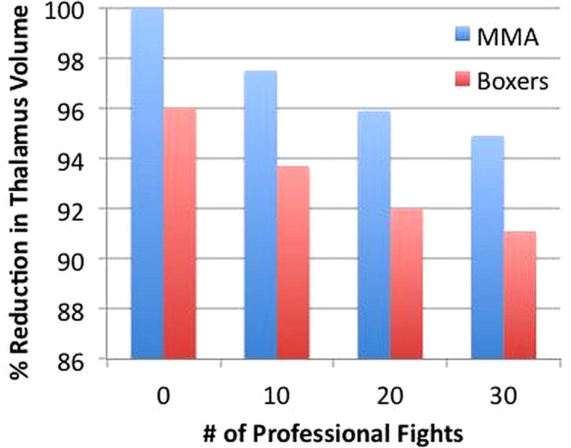 The study will follow up with its participants for baseline evaluation on an annual basis over the next 4 years. Given the longitudinal nature of this study important information is expected to be forthcoming in the following years giving far greater insight into the toll of combat sports on the brain.