Alongside issues arising from Concussion Mismanagement and PED Abuse, Rapid Extreme Weight Cutting practices are a tragedy waiting to happen in MMA.  Today, a teachable moment arose at the UFC 171 weigh ins that regrettably was overlooked.

Welterweight title contender Johny Hendricks failed to make weight on his first attempt.  Not only did he fall short of the 170 lbs limit but at the 34:00 mark he can be seen shaking uncontrollably and when asked by the official in charge to “stay still” he struggles to comply.

It is not a stretch to assume his uncontrollable shaking is a symptom of dehydration.   I don’t like to assume so I reached out to orthopedic surgeon and MMAJunkie fight medicine contributor Dr. Johnny Benjamin.  Here is his reply:

Hendricks went on to cut further and ultimately made his target weight.   All’s well that end’s well, right?   Not necessarily.  Assuming Hendricks uncontrollable shaking was a symptom of dehydration the matter should have ended at the very first weigh in.

Athletic Commissions exist first and foremost for combatant safety.  The dangers associated with rapid extreme weight cutting are not new to commissions and in Texas, the jurisdiction where this incident arose,  the Government specifically turned their mind to this.  Section 61.105(f) of Texas’ Combative Sports Administrative Rules deals with evident dehydration at a pre-bout weigh in and reads as follows:

(f) If in an attempt to make weight, a contestant shows evidence of dehydration, having taken diuretics, or other drugs, or having used any other harsh modality, the department shall disqualify the contestant on the advice of the examining physician.

There are two key words in the above passage, “or” and “shall”.  By using the word “or” the rules of statutory interpretation make each one of the listed conditions trigger the consequence of disqualification.  All that is required is that a “contestant shows evidence of dehydration“.  From there the Texas Department of Licensing and Regulation “shall” disqualify the contestant.  Shall leaves no discretion, it is a mandatory consequence.  It may be a harsh result but the rule was presumably written with combatant safety in mind.

Of course Hendricks has not been disqualified and the bout is scheduled to proceed.  Perhaps Hendricks’ uncontrollable shaking was not “evidence of dehydration“.  Maybe it was a case of nerves.  Maybe he was cold.  Or maybe it was, in fact, due to a rapid extreme weight cut which has become common practice in MMA as this fight day photo posted by Hendricks’ nutritionist Mike Dolce seems to indicate: 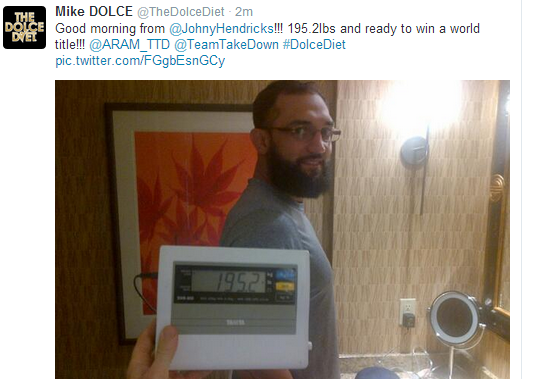 If it was, unfortunately, this appears to be another example of a regulatory agency ignoring the safety rules that they were entrusted to apply in the world of combat sports.