Be it a union or an athletes association, there have been varying efforts over the years to organize UFC and other professional MMA fighters.  None have proven successful.

The latest to enter this difficult landscape is Project Spearhead.  The effort is headed by labor attorney Lucas Middlebrook and MMA fighter Leslie Smith who is named the organization’s Interim President.

What sets this effort apart from its predecessors is a call to action that is clear, precise and easy to understand.  Project Spearhead notes that UFC fighters are either independent contractors or employees but presently only enjoy the worst of both worlds.  Past efforts to organize fighters seem split over which labor designation is best.  Project Spearhead, on the other hand, does not seem invested in one designation over another rather seeks to clarify the fighters legal status and from there ensure that fighters enjoy the benefits and protections from their correct labor designation.  This is Big Tent politics. This is a recipe that can succeed.  Project Spearhead lists the following Four Point Plan of action:

Below is the authorization cards Project Spearhead askes current UFC fighters to fill out.  Fighters have little to lose by doing so and getting clarity fo their legal status and organizing to help better their professional landscape. 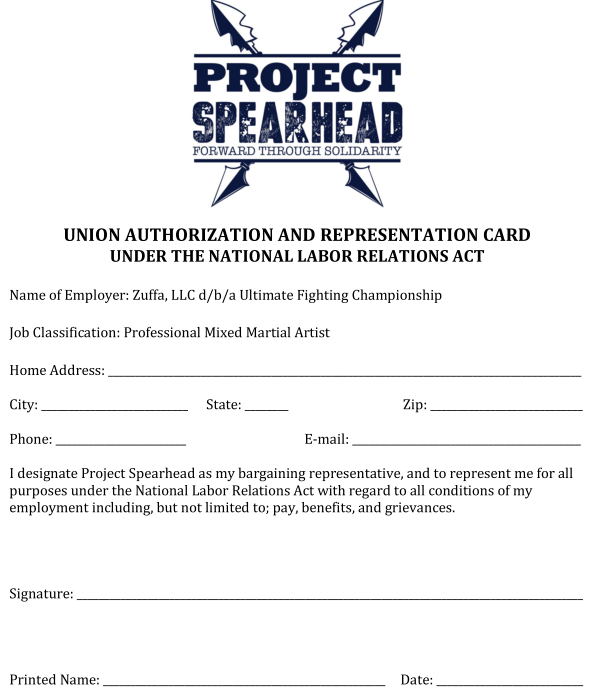