Today the World Anti Doping Agency published changes to their list of prohibited substances and methods.

Among the noteworthy changes are the removal of alcohol from the prohibited list along with CBD.

Alcohol was never banned by WADA in or out of competition for combat sports. CBD, on the other hand, was banned in competition as prominently came to light after Nate Diaz was filmed vaping following his UFC 202 bout.

WADA has published the following explanatory notes regarding these changes: 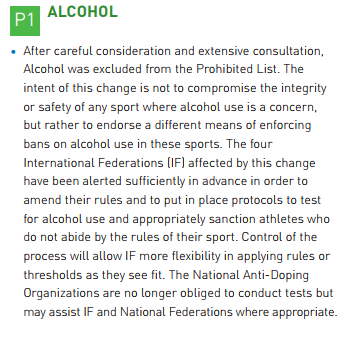 One point worth noting is that WADA does not possess a monopoly when it comes to naming prohibited substances in combat sports.  Each Athletic Commission is a fiefdom unto itself.  Some adopt the WADA prohibited list.  Others do not and have their own list of prohibited substances.  Combat sports athletes must be diligent in checking what is prohibited in every jurisdiction they compete in.