Update July 15, 2017– USADA have confirmed Mayweather is being tested by them.  This leaves the only question of why the NAC have not bothered obtaining a copy of the anti-doping contract between Mayweather Promotions and USADA. 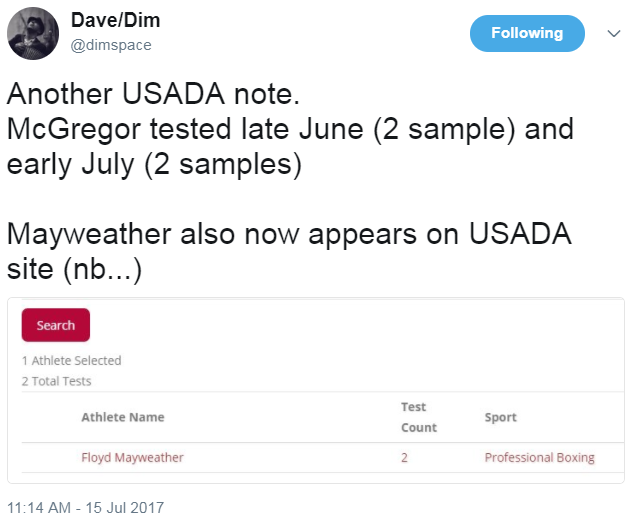 Conor McGregor has been subject to random out of competition drug testing by the United States Anti Doping Agency ever since they became the UFC’s drug testing partner.

McGregor has been tested, over and above any commission testing, 3 times this year by the anti-doping watchdog.

It is unclear if Floyd Mayweather has agreed to subject himself to this strict testing but from inquiries through the Nevada Athletic Commission it does not appear so.

Sec. 42. 1. Except as otherwise provided in subsection 2, upon the request of the
Commission, a promoter shall submit to the Commission a copy of any contract and each
amendment to a contract entered into by the promoter and an organization that administers a
drug testing program on behalf of the promoter

I submitted a public records request to the Nevada Athletic Commission for any contract for the McGregor vs Mayweather bout filed under this section.  They replied noting they have no such document on file –

I followed up with the NAC asking if a contract exists but was simply reviewed but not filed as allowed by subsection 2.  The answer was no, that no such contract has been reviewed by the NAC.

This is somewhat curious as it has been reported that UFC President Dana White stated USADA indeed are testing  Mayweather for this bout. 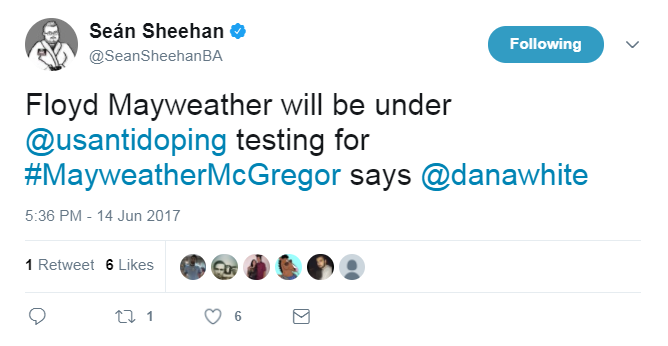 It is unknown if a private anti-doping contract exists for this bout. It is possible that one does and the NAC simply have not exercised their right to scrutinize it.   If, however, there is no such private agreement then Mayweather and McGregor are going into this bout navigating an uneven anti-doping testing landscape with both fighters subject to NAC testing but only McGregor being under the watch of USADA.

If, on the other hand, such a contract exists but the NAC have not bothered obtaining a copy the question is why?

One would expect as part of the USADA’s application to become a “sanctioned drug testing organization” for Mayweather Promotions for this bout the NAC would have requested a copy of the contract that was negotiated.  That apparently is not the case for reasons that are unclear.