After partly surviving a UFC motion to dismiss Mark Hunt has doubled down on his most serious allegations against Zuffa, Dana White and Brock Lesnar.

Lesnar was sanctioned for anti-doping policy violations surrounding his bout with Hunt at UFC 200.

Hunt’s amended filing, which can be viewed here courtesy of Marc Raimondi, sets out ten causes of action against the Defendants including the racketeering allegations which, if proven, pave the way for treble damages.

Included in the amended complaint is a fresh allegation of battery.  As discussed in 2013, a claim for battery/assault is perhaps the road of least resistance when it comes to suing a doping competitor in combat sports.

Although Hunt made public comments before the bout that he did not care if Lesnar was doping noting “I don’t care if you’re cheating or not. I’ll punch your face in. That’s all I’ve got,” the amended filing argues that, privately, Hunt did care and was inquiring about Lesnar’s potential doping with the following exchange: 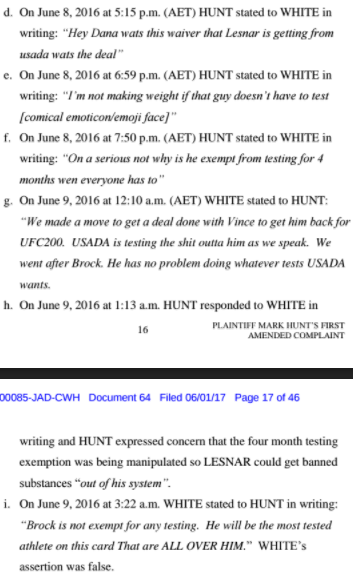 This exchange is important because for a battery claim to succeed there cannot be consent to fight.  Fraud can vitiate consent and Hunt’s attorney is hoping this exchange is sufficient to do so.

With the RICO (racketeering) allegations still live there remains a chance that the UFC’s testosterone replacement therapy era will come into play.  The lawsuit suggests a doping conspiracy exists and goes back to at least 2011 when the UFC handed out testosterone hall passes to Vitor Belfort.  As previously discussed, the UFC’s “TRT era” has skeletons waiting to be revealed and Hunt’s aggressive litigation strategy may expose some of these.

This lawsuit may end with the UFC winning a battle but losing the war.  Even if they succeed in defeating Hunt’s claim their brand can be damaged by a prolonged and public legal battle shining a spotlight on their TRT era.  For this reason an out of court settlement cannot be ruled out despite the UFC typically unyielding responses to litigation.