Update January 27, 2017 – this week Missouri responded to an appeal of Haga and unfortunately refused to overturn the result leaving judicial review as the only remaining legal remedy 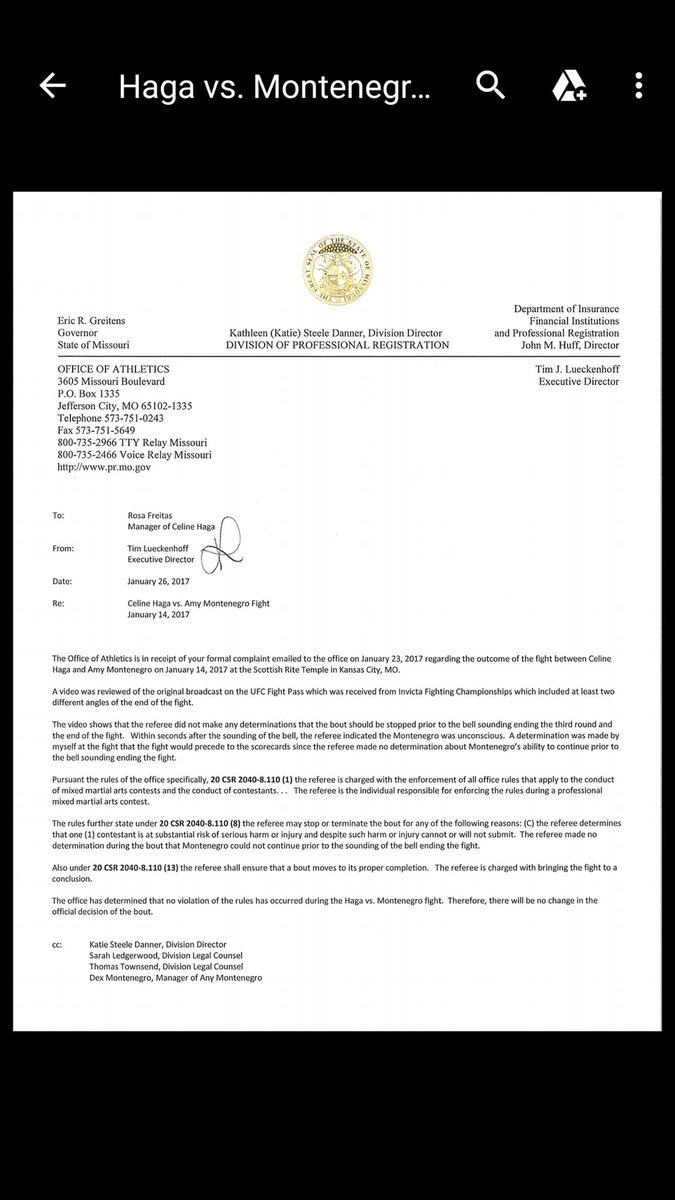 Tonight Celine Haga choked her opponent unconscious at Invicta 21 as her bout came to an end but instead of being declared the winner the matter went to the judges who handed her opponent a victory.

The bout took place in Kansas City and was regulated by Missouri’s Office of Athletics.

This is an unusual event and does not appear to be clearly defined in the applicable regulations.  In other words the Regulations don’t expressly say “when a figther is unconscious before the bell due to a legal submission they will be declared the loser of the bout“.  It is a result which should be self evident.

As was learned from the Tonya Evinger controversy, Missouri does have appellate rights for fighters but these are limited in scope.

Any party may contest the outcome of any bout within ten (10) days of the decision by writing all the facts and the basis for the complaint. The complaint must be forwarded to the office. If there appears to be a violation of these rules, the director or his/her designate shall investigate, and, if the claims seem to be substantial, hold a hearing and issue its findings and decision.

The next question is when can the commission overturn the result of a bout on appeal?  This is where things become a little murkier.

Clearly they can change the ‘outcome of a bout‘ but are silent on the circumstances  when they can do so. All the appellate rules reference is needing a “violation of these rules“.

There is no universal appellate standard in MMA but the most common circumstances for changing the outcome of a bout across other jurisdictions are when the following occur:

1.  The Commission determines that there was collusion affecting the result of the contest or exhibition;

2.  The compilation of the scorecards of the judges discloses an error which shows that the decision was given to the wrong unarmed combatant; or

3.  As the result of an error in interpreting a provision of this chapter, the referee has rendered an incorrect decision.

The only one of these that can be of value to Haga is #3 but without pointing to a Rule that the referee should have declared a different result a conventional appeal may lack the needed framework.

Haga should consider citing this rule, asking the Inspector to overturn the bout result to a win in her favor and in support cite what co-founder of the Unified Rules, Referee John McCarthey says should occur in this circumstance if the rules are silent, namely that “if the fight finishes with an athlete unconscious in a submission, the result is a submission victory for the athlete applying the submission.“

If the Inspector is unwilling to do so Haga can scour the rules pointing to anything supporting her argument in a formal appeal.  One rule Haga can point to is 20 CSR 2040-8.110 which states a referee may “stop or terminate a bout” where “The referee determines that one (1) of the contestants is at substantial risk of serious harm or injury and despite such harm or injury cannot or will not submit“.  This language would clearly apply to a situation where a fighter is choked unconscious.

Missouri’s MMA regulations contain a hodge-podge of obscure rules such as requiring timekeepers to keep a “knockdown count” which applies when a fighter is “unable to defend herself” and further that a fighter cannot be saved by the bell in such a situation.  Instead if a fighter is unable to defend herself “within ten seconds of the end of the round,, the timekeeper shall not ring the bell until the referee indicates the contestant is ready“.

Overturning bout results is notoriously difficult but whatever route it takes to get there, hopefully this result will be overturned.