There was some celebration in the combat sports world when the Nevada Athletic Commissions perhaps most controversial member, Pat Lundvall, who played a central role in the controversial Wanderlei Silva, Nick Diaz and Conor McGregor punishments, was stepping down.

Her replacement, however, appears to come with his own history of controversy.

Last week Nevada Governor Sandoval announced that Dr. J. Daniel Carpenter, an eye doctor, was appointed as Lundvall’s successor.  The press release notes ““Dr. Carpenter has worked as the personal physician and surgeon for the United States Olympic Boxing Team and many of the sport’s top fighters. He has worked with the athletes before and after competition and will bring a unique perspective regarding their health and well-being,” said Governor Brian Sandoval. “He is an accomplished physician and I am confident his knowledge will benefit the top athletic regulatory body in Nevada.”

However, a quick Google search reveals a September 21, 2005 article from the Las Vegas Sun highlighting a troubling history of “12 counts of malpractice and unprofessional conduct“.

The article notes as follows:

The state Board of Osteopathic Medicine found an eye doctor guilty of 12 counts of malpractice and unprofessional conduct for performing and billing unnecessary eye procedures but did not revoke the doctor’s license during a hearing on Saturday.

The Nevada State Board of Osteopathic Medicine published this full disciplinary order of Dr. James Daniel Carpenter  with the below formal order 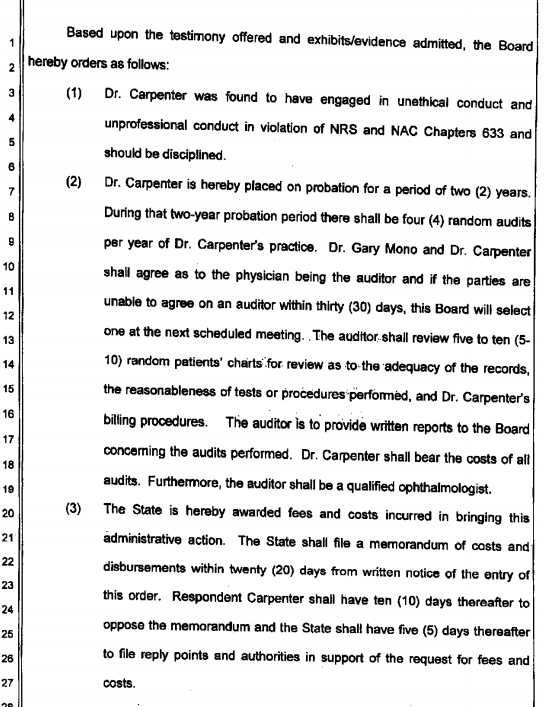 Governor’ Sandoval’s press release notes ““He is an accomplished physician and I am confident his knowledge will benefit the top athletic regulatory body in Nevada.”.

While having commissioners well versed in health and safety is important, fair decisions respecting due process of combat sports stakeholders is key.  Hopefully the NAC’s latest member’s reported “unprofessional conduct” will not foreshadow future decisions as a key member of perhaps the most powerful athletic commission in combat sports.