As first reported by MMAFighting.com’s Marc Raimondi, the Association of Boxing Commissions MMA Rules and Regulations Committee has been refining proposed changes to the Unified Rules of MMA.

The proposed changes include redefining eye pokes to include a potential infraction before the eye poke occurs, to allow 12-6 elbows, heel kicks to the kidney and grabbing the clavicle and to redefine what constitutes a grounded opponent.

“(the rules)will be tested out Friday during the Victory Fighting Championship event in Urbandale, Iowa. VFC 48 will air live on UFC Fight Pass.

All of the rules being experimented with Friday night will be voted on by the MMA Rules and Regulations Committee in the coming months, according to committee chairman Sean Wheelock.“

Below is a screenshot capturing the proposed rule changes . 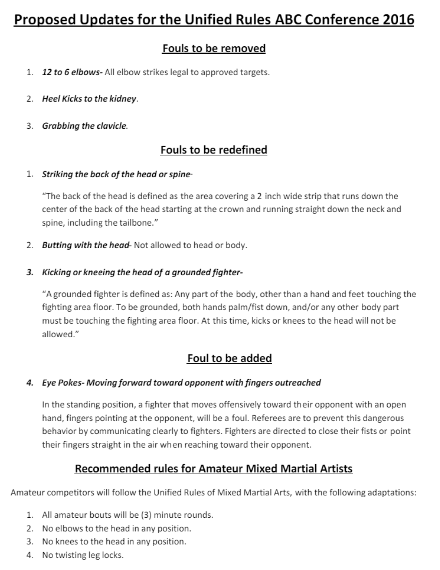