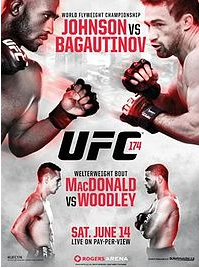 (Update – July 11, 2014 – The BCAC has changed their position and did indeed implement an out of competition test prior to UFC 174 on Bagautinov)

UFC 174 will be the promotion’s first event regulated under the newly formed Office of the British Columbia Athletic Commissioner.

Despite this aggressive stance on TRT, the BCAC appears to be limiting their testing to post event screening.  Unlike the Nevada State Athletic Commission who are slowly embracing a policy of more out of competition testing, the BCAC apparently is not prepared to take such steps at this time.  I contacted BC’s Athletic Commissioner, Dave Maedel, asking for the following clarification of their anti doping measures:

To which the BCAC replied as follows:

“At this time, we will be limiting to in competition testing only.”

A quick legal breakdown reveals that the BCAC has the ability to conduct out of competition testing if they so desire with Section 46(2)(o) of the Athletic Commissioner Act allowing “drug and alcohol testing of professional athletes on a random basis or otherwise“.  With this framework at hand Regulation 21 was passed which requires that “on request of the commissioner, a contestant must report for and provide samples for testing for the presence of a banned substance.“.   The definition of “contestant” includes licensed contestants for the purpose of Section 21 meaning the Commissioner has jurisdiction to request drug screening as soon as a contestant licence is granted.

Anti doping measures in MMA continue to evolve and, as previously discussed, Athletic Commissions should explore more aggressive testing policies to weed out cheating.  Given the reported doping history against one of the combatants competing at UFC 174 (which are apparently disputed by the competitor in question)the BCAC should follow the NSAC’s lead and be open to expanding their testing  to include pre bout screening.