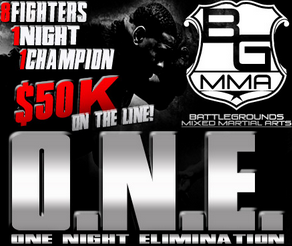 UPADATE – After a series of setbacks this event was pushed back from its June date and is now scheduled to take place on October 3, 2014.

It is reported that the Oklahoma State Athletic Commission has approved a one night, 8 man elimination MMA tournament.  Promoted as the “Battlegrounds ONE Tournament” it is advertised as “ the most grueling and punishing tournament in sports”.

As a fan whose first exposure to MMA was the old tournament format popularized by the UFC of the 1990’s I have some nostalgia for such events, however, given modern government regulation of the sport my interests quickly shift to the legal overview of such an event.

Despite reports that the format has been approved and the letter from promoter Brian O’Rourke requesting rule changes to allow such an event being publicly available, a review of the presently published Oklahoma State Athletic Rules (Title 92 – General Agency Rules) don’t explain how such a format can be sanctioned.  Looking to Subchapter 7 of the published Oklahoma Rules elimination rules are specifically allowed, however, among the requirements are mandatory 16 oz boxing gloves, headgear, and 3 one minute rounds.

Interestingly the request for approval of this event states that the suggested rule changes allowing one night elimination MMA tournaments “has been compiled with major contributions form some of the leading surgical physicians of impact and combat sports nationwide“.

Despite this claim the Association of Boxing Commissions Medical Committee disagrees with the safety of one night elimination tournaments in MMA.  Last year they released a consensus statement on the topic which is reproduced below:

It is the stance of the ABC Medical Committee that single event, tournament style
mixed martial arts shows stand in contradistinction to all efforts of its participating
physicians to provide the best possible safety regulations and healthcare for combat
sports participants.
Tournament style MMA will not be endorsed for the following reasons:
o There is minimal to no time for athletes to recover between bouts
o There is no guarantee that second round opponents will have had similar
experiences in their first rounds. For example, one second round participant
may have submitted his opponent in the first round due to disparate skill sets
while the other opponent may have had a grueling stand up fight for three
rounds. This makes the second round “playing field” unequal.
o Fatigued and dehydrated participants are at increased risk of injury to every
organ system.

o In the case of MMA, orthopedic injuries are more likely to occur.
o Competitors maybe exposed to a greater number of head blows for an
extended period of time with no chance for adequate rehydration or
recovery, thus potentially increasing the risk and severity of concussions,
cerebral bleeding, or second impact syndrome.

Repetitive chokes may occur in a time period extending over multiple match-ups,

I reached out to the Oklahoma State Athletic Commission requesting a copy of any amendments to their Agency Rules explaining how the above event is sanctioned.  Interestingly, there is no specific provision in the MMA sub chapter dealing with elimination tournaments and given the silence the OSAC seems content to sanction this event.  Given that subchapter 7 deals specifically with elimination tournaments it is hard to see how those rules can be overlooked.  In any event, here my correspondence with the  OSAC’s Joe Miller:

I have reviewed Subchapter 11 as published under the General Agency Rules and have further looked at the Rule changes effective July 1, 2013 at the following link:  http://www.ok.gov/osac/documents/Title%2092%20adopted%20rules.pdf

I cannot find any provisions that speak to one night elimination tournaments for MMA.

Perhaps I am missing something, can you point me to the specific link containing the rules and point out the relevant subsections?

To which Mr. Miller replied:

The entirety of Chapter 11 covers the rules for mma.  Each bout is viewed as a separate bout to itself.  We have no rule in place preventing an mma fighter from competing on consecutive days or on the same night.