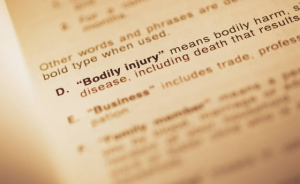 I am not a professional combatant, I am not a promoter and I am not a government regulator.  Despite this I go on and on about the need of Provinces like Ontario and Quebec to pass appropriate laws to legalize amateur MMA instead of turning a blind eye, and here I go again.  Why? Because it matters.

I am a professional litigator.  I am in the suing business and when it comes to lawsuits I can tell you that technicalities matter.  The criminal act exclusion clause is one such technicality which can lead to financially devastating results should a mishap occur at an MMA event.

Provinces like Quebec have a long history of hosting AMMA events. There is a good safety record.  Medical precautions are taken.  There is oversight.  People are content with the current landscape.  The participants are happy, so are the promoters, the public and the local government authorities.  Why should promoters and participants care about the letter of the law when the Province is willing to turn a blind eye?

Besides all the problems that can come with selective enforcement of the law (think favoritism and abuse of power), when it comes to money technicalities will matter.  Insurance is a staple in legalized combat sports.  When government regulated combat sports take place there are minimum insurance requirements for those hosting the events.  This requirement is intended to protect the people involved in the case of a lawsuit after something goes awry.  The insurance protects those being sued and it pays for those who suffer harm through the neglect of  others.

Imagine a careless oversight in the course of an event resulting in profound injury with a participant or audience member suing for damages.  As soon as an insurer is facing the reality of paying hundreds of thousands of dollars in Third Party liability coverage you can be assured they will dot their i’s and cross their t’s.  “Criminal Conduct Exclusions” are common in insurance contracts.  These exclude coverage for injuries and losses that take place during criminal acts.  A prize fight held in a jurisdiction without a Bill S-209 compliant law will be in breach of the Criminal Code. This extends not only to combatants but the entire promoted event.  These events  will be caught by such exclusion clauses.  Insurers will deny coverage.  This will leave those targeted by lawsuits on the hook to pay their own defense costs and to be personally exposed to damage awards.  Being on the losing end of an uninsured lawsuit can be financially ruining.  This can lead to very harsh results, as Queen’s law school Associate Professor Erik Knutsen notes:

The Court of Appeal for Ontario did not consider either the purpose or effect of the clause in Eichmanis v. Wawanesa Insurance Co. (2007), 84 O.R. (3d) 668. The court held that the “criminal act” fortuity clause excludes from liability insurance coverage any losses that resulted from an insured’s criminal conduct, regardless of the insured’s subjective intent to commit the crime or cause the loss. The insured in this case, a fifteen-year-old boy, was playing with a firearm which accidentally discharged, severely injuring a thirteen-year-old boy. The fifteen-year-old was charged and pled guilty to criminal negligence causing bodily harm.

This literalist construction of the exclusion completely ignores the sole purpose of the “criminal act” fortuity clause—to motivate insureds to control behaviour to avoid a definite, unfortuitous loss. By holding that insurance coverage is ousted on the commission of any criminal act, regardless of the insured’s subjective intent, the court transformed this fortuity clause into something more than what it was meant to do. No matter how an insured adjusts her risky behaviour, if that behaviour which causes a loss can somehow be construed as a “crime,” coverage is ousted.

The good intentions of promoters will not matter, neither will assumptions of legality.  A good safety record is irrelevant.   Having oversight will be irrelevant.  When it comes to insurance coverage insurers will point to this technicality and deny coverage.

If you are interested in fostering the growth of amateur MMA and other combat sports in Canada the very first step is for Provincial governments to pass Bill S-209 compliant laws legalizing the sport.  If you live in a Province where such a law does not exist the starting point is to lobby government to pass appropriate laws.  From there certainty will exist for those wishing to be involved in the sport and growth can occur helping the sport to reach its potential.