If you haven’t heard about the controversial recent fight of Tony Lopez you can visit MiddleEasy who report that “Tony Lopez did the most reprehensible thing one could ever do in mixed martial arts. After securing a rear naked choke on his opponent, Lopez held on to the submission as the referee was trying to separate him. It’s not as if he didn’t feel the ref pushing his body off his opponent. Tony Lopez intentionally held on to the choke and after he felt like he was done punishing his opponent, Tony Lopez hit him in the face.”

MiddleEasy uploaded the following GIF of the incident in which you can judge for yourself how reprehensible the conduct is.  Perhaps more damning than the video, Lopez goes on to admit the intentional nature of his actions with Bloody Elbow quoting him as saying “”…I sink it in, he taps, but I said “it’s a fight”. I’m heated. He hit me. So after the choke, I gave him a little hit. Some payback.”

So what if a situation like this took place in a sanctioned bout in Canada?  What kinds of repercussions could an athlete be exposed to?

In addition to suspension from the governing athletic commission, criminal charges would not be out of the question.  You need look no further than the aftermath of the McSorley/Brashear altercation or the Bertuzzi/Moore incident to recognize that Canadian law sets limits to consent in sports.  Even when a bout is properly sanctioned by an appropriate athletic commission this does not suspend the assault provisions of the Criminal Code.

Under section 265 of the Criminal Code a person commits an assault when “without the consent of another person, he applies force intentionally to that other person, directly or indirectly“.

While consent is a valid defense to an assault charge the defense has limits.  The Supreme Court of Canada, in R v. Jobiden, confirmed that while individuals can consent to a fight the consent does not extend to “violent forms of force which clearly extend beyond the ordinary norms of conduct .”

A tap out and referee stoppage are two recognized ends to an MMA bout.  When either occurs the consent to contact ends.  If force is “intentionally” applied after either scenario and if the force “clearly extends beyond the ordinary norms of conduct ”  a criminal conviction can be secured.  MMA and combat sports are regulated activities and the application of the Criminal Code does not stop in the ring or cage.  As the below courtroom sketch reminds us, if an athlete crosses the line criminal prosecution remains a reality under Canadian law. 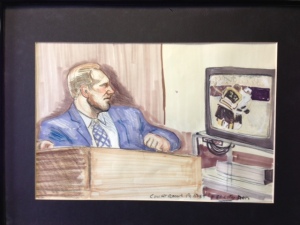 One thought on “What if the Tony Lopez Situation Occurred in Canada?”