As Yogi Berra said, it ain’t over till it’s over.  While Bill S-209 is expected to pass into law giving professional MMA a legal framework in Canada, the Canadian Medical Association is doing what it can to derail this result.

In a press release issued today it is reported that the president of the Canadian Medical Association is warning MPs about the dangers of legitimizing mixed martial arts bouts.  While this is of  little surprise given the CMA’s official position that “all boxing be banned in Canada” it is a hypocritical position to take.   Although MMA / Boxing clearly come with risk of participant injury the overall risk is “lower than football, hockey, wrestling and soccer”.  It is a slippery slope to get into the issue of the prohibition of one sport without addressing others.  If we go down that route even popular activities such as cheerleading could be scrutinized due to high traumatic injury risk.  The CMA is not taking any public stance on other sports with higher injury rates making it hard to understand the driving force behind their position if it is not grounded in injury risk.

The CMA would better serve the community by informing the public of real risks of injury in any given contact sport, including long term health consequences from the realities of traumatic brain injury, instead of playing politics.  The public is best served with good information so participants can make informed decisions about whether they wish to engage in any given activity and the medical community can play an important role in educating the public of these risks.  Running away from regulation, on the other hand, does not serve the public interest.  One need look no further than the progress MMA has made over the past twenty years to realize that regulation has proven beneficial to the development of this sport and the safety of its participants.

The text of the full press release reads as follows:

OTTAWA – The president of the Canadian Medical Association is warning MPs about the dangers of legitimizing mixed martial arts bouts.

Dr. Anna Reid is appearing before the Commons justice committee which is studying legislation that would bring combat sports, including mixed martial arts, under supervision and regulation.

The bill would update the 80-year-old Criminal Code section dealing with prize fights.

Combat sports are currently in a sort of legal limbo in that they technically may be illegal under the law, but are condoned.

Supporters of the bill say it will promote safer practices in mixed martial arts, a popular — if often bloody — contest.

The association’s general council voted in 2010 for a ban on mixed martial arts prize fighting matches.

The present legislation passed the Senate with broad support and a similar bill had strong support on the Commons before it died due to prorogation.

Reid says the doctors don’t oppose combat sports such as judo and karate.

“However, cage fighting, like boxing, is distinct from many other sports, in that the basic intent of the fighter is to cause harm in order to incapacitate his or her opponent,” she said.

“And an activity in which the overriding goal is to pummel one’s opponent into submission does not promote good health.”

She said there is little evidence about the long-term risks from this kind of fighting, but noted studies show boxing poses risks of head trauma and subsequent neurological problems.

“For parliamentarians, and for society, the question of whether to legalize MMA under the Criminal Code therefore comes down to a choice: a choice between money and health.”

She said it is her duty to protect the health of patients and to promote non-harmful activities and it is the mandate of the CMA to advocate for the highest standards of health and health care.

“For me, as a physician, it is about putting health first. I cannot condone punches to the head.”

Here is a screenshot of their contemporaneous tweet stream: 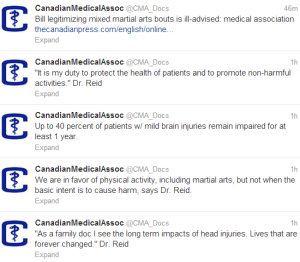